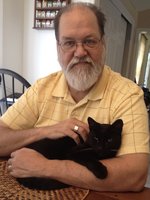 On Saturday, August 8, 2020, Keith Arthur Gerstl, loving husband, father, and grandfather, passed away at the age of 63. Keith was born on June 17th, 1957, in Princeton, NJ, to Arthur and Marion Gerstl. He graduated from Hillsborough High School in 1975, and went on to become a rehabilitation equipment specialist and also worked as a public health investigator and recycling specialist for the Ocean County Health Department. Keith and Pam met as high schoolers in Somerset County 4-H. On October 11, 1980, he married the love of his life, Pamela Ruth Trionfo. Together they raised one son, Roger Franklin, and one daughter, Haylee Rosemarie. Keith and Pam were also foster parents of Arianna and Britton. Keith was a faithful Christian who always tried to reflect the love of God in his everyday life. He was a founding member of the Lord of Lords Bible Community Church. He served on the church board for many years and was proud to be an active member of his church family. Keith also loved the outdoors and enjoyed camping and vacationing with his family, most often throughout Maine and Chincoteague, Virginia. Keith was involved with the local Boy Scouts for over 12 years. Keith was a former cubmaster of Cub Scout Pack 42 of Waretown and assistant scoutmaster of Boy Scout Troop 42 of Waretown and Troop 26 of Barnegat. Keith also was an avid birdwatcher and frequented local bird sanctuaries, identifying and cataloging local and migratory birds. Most of all, Keith enjoyed spending time with family and his grandchildren, whom he adored. Keith was preceded in death by his father, Arthur, his mother, Marion, and his brother, Gary. He is forever remembered by his wife Pamela, his son Roger (Delinda), daughter Haylee, and grandchildren Roger (Roger) and Lucille (Roger). Keith will also be forever remembered by his brother Randy (Lori), his children Jay (Maja) and Leanne, as well as his sister in law Kelly (Gary), and her children Connor and Kyle. He will also be forever remembered by his sisters in law Pat (Broderick), her children Patrick and Paige, Penni (Walt), her children Gwen and Kyle, and Peggy, and her children Ryan and Teresa. A memorial service will be planned in the fall.