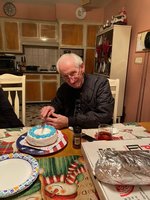 Dennis M. Shields 79 of Brick, NJ passed away on Tuesday June 8th at his home peacefully surrounded by his family. Dennis was born to James and Mary Shields in Weehawken, NJ on January 5, 1942. He was predeceased by his parents as well as his brother James Shields. He served in the Army as a Military Police Officer from 1964-1966. Dennis was married to Joy Rae on April 8,1967 at the Embassy Theater in Union City. They were married for 53 years. He worked as an auto body man and owned his own body shop in Paramus, NJ. Dennis is survived by Joy Rae, his wife, daughter Jenise Southworth from Toms River and son-in-law Vincent, his 2 granddaughters Alyssa and Sophie, his furry friend Memphis and many cousins, nieces and nephews.