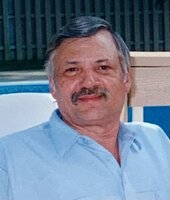 It is with great sadness that we announce the passing of Dennis Roberts born in Newark on November 6, 1948. He passed away suddenly at Southern Ocean Medical Center on November 14, 2021. He spent nearly 20 years as a mechanic and later, a foreman in the Newark City Subway for New Jersey Transit. In 1989 he relocated to Bayville, NJ where he opened a small business – Roberts Family Market with his son and late wife Lori. In 1994 he moved to Ocean Gate where he started tending bar at VFW Post 9503 and entertaining the local troops with his unique character and sense of humor! He loved the Jersey Shore spending many days fishing and crabbing on Barnegat Bay as well as playing boardwalk games of chance where he was very “lucky” to bring home many prizes. Dennis leaves behind his longtime partner of 28 years Beverly Polise as well as his son, Rene Roberts and daughter-in-law, Michele Roberts. He will be deeply missed by his extended family Debbie and Harry Melendez, Robert and Jodi Mathias and Tammy Mathias. He was a devoted and loving grandpa to John, Michael, Justin, Ryan, Samantha, R.J., Jordan and Jacob. Dennis was capable of driving his family to the brink of madness but he the most kind, caring and generous man who has left a void in the soul of each one of us. Dennis will be cremated and although there will be no formal funeral or memorial service we ask that all keep him close in their hearts through the memories that were made with him. We love you forever.