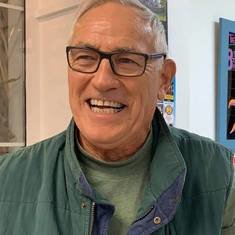 Please share a memory of Albert to include in a keepsake book for family and friends.
View Tribute Book

Albert “Bruce” Shenk, 83, passed away at his home in Little Silver on November 20th, 2019  surrounded by his loving family. Bruce was born and raised in Hershey, PA to the late Ira and Mary (Parmer) Shenk (1984/2005). He lived in Montclair and West Caldwell (1964-2004) and later moved to Normandy Beach, NJ (1984) with his wife, Geraldine, in 2004. Bruce and Geri moved to Little Silver in 2012. Bruce graduated from Hershey High School in 1954 and earned his B.S. Degree at West Chester University, PA (1959). A two-time All-American football player who was inducted into the West Chester Hall of Fame for Football and Nationally accomplished track athlete. Bruce went on to build an impressive and lifelong career in education.  While working as a math teacher, head football coach, and track coach at Phoenixville High School, Bruce earned his Masters Degree in Guidance and Personnel at Villanova University.  Bruce served as the Assistant Dean of Men at Bucknell University and then took on a guidance counselor position and Director of Guidance at James Caldwell High School for almost three decades (1965 – 1993). During this time, Bruce and Geri also started an antique business, focused on early American works that they ran successfully for almost 30 years. Bruce and Geri's passion for travel found them globetrotting the world over.

Bruce was a man full of energy and greeted everyone with a smile.  He made friends wherever he went.  Pop Pop (as Bruce was known to his grandchildren), took a very active role in his grandkids’ lives. Pop Pop rarely missed a game, a wrestling match, a race, a school play or music recital.

Bruce was an ever-present and loving parent who loved cooking big holiday dinners for family and friends as much as he enjoyed sharing a cup of coffee first thing every morning.  Regardless of the occasion, Bruce had a natural gift of lighting up the room with his smile and his love of life. An amazing story teller and incorrigible practical joker, Bruce also had a passion for the outdoors. He loved nature, and like his Mother, was an avid gardener who loved tending to beautiful flowers and growing every kind of vegetable imaginable.  Bruce stayed extremely active to the very end.

He is predeceased by his parents and his beloved wife whom he married in 1964 in Hershey, PA; his children and their spouses Kyle and Danielle Shenk of Atlantic Highlands, NJ and Taryn and Michael Lenahan of Little Silver, NJ; his sister Gladys Drobeck of Fredericksburg, TX and four grandchildren: Tori and Mason Shenk, and Aidan and Aubrey Lenahan. Bruce is now united with the love of his life Geri, and we are confident they are dancing in Heaven, smiling down upon us all.

Bruce’s wishes are for the family to host a Celebration of Life Gathering.  Details will be posted on his memorial website: bruce-shenk.forevermissed.com. On this site, friends and family are encouraged to share stories, upload and view pictures to pay tribute and preserve his memory for the countless numbers of people he touched including former students, athletes, his children and grandchildren.  The site will also be updated to announce the date and venue for the Celebration of Life Gathering sometime in December or January.

In lieu of flowers, Bruce also requested to consider donating to Stephy’s Place. Stephy’s Place provides free support groups to those who have lost a loved one. “After the death of our mom, our dad found great comfort at Stephy’s Place, in the presence of others who had also lost their spouses.” Your donations, in memory of Bruce, will aid in their mission of helping the bereaved in his name as Bruce found great friendship and comfort at Stephy’s Place after his beloved Geri passed away in April 2019. To make a donation click here: www.stephysplace.org - see the ‘Bruce Shenk Donation’ button at the top right of the page.

To plant a beautiful memorial tree in memory of Albert Shenk, please visit our Tree Store

Look inside to read what others have shared
Family and friends are coming together online to create a special keepsake. Every memory left on the online obituary will be automatically included in this book.
View Tribute Book
Services for Albert Shenk
There are no events scheduled. You can still show your support by planting a tree in memory of Albert Shenk.
Plant a tree in memory of Albert

Share Your Memory of
Albert
Upload Your Memory View All Memories
Be the first to upload a memory!
Share A Memory
Plant a Tree