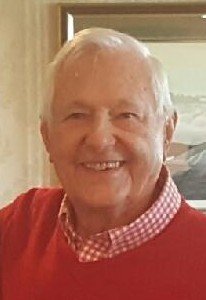 Please share a memory of Louis to include in a keepsake book for family and friends.
View Tribute Book
On February 21, 2020 a remarkable man, Louis Gerard Sonta, passed away at the auspicious age of 93. Surviving are his wife of 72 years, Rachel (Dolan) Sonta; his sons David and Timothy, his wife Elaine; his 3 granddaughters Noel Peterson, her husband Allan, Rebecca Rodenbaugh, her husband Josey, and Samantha Sonta; his great-grandson Dylan Peterson and many nieces and nephews. Raised in Lyndhurst, NJ, Sweet Lou (as his brothers and sisters called him, since he was the baby of the family), was the youngest of 8 and the last surviving child of John and Emily (DeGennaro) Sonta. He started working at an early age as a messenger for Western Union, looking very dapper in his jodhpurs and boots. His career in the printing industry began at Becton-Dickinson, where he met his beautiful wife Rae – who claims that she married him because his last name was as close to Sinatra as she would get. In 1949 he went on to become the founder of Regent Printing, which evolved into a family business where his two sons would later work as well. Lou was inducted into the Print NJ Century Club, where his award was issued by television news anchorman, Rolland Smith. This was a very prestigious award given for years of meritorious service to the industry. Lou and Rae had a very active social life. When they were younger their basement in Clifton was the site of many parties, shuffleboard tournaments and poker games. They enjoyed playing golf at the North Jersey Country Club, where Lou would always talk animatedly with his hands and knock his drink over – Rae always seemed to be the target. He had a love/hate relationship with the New York Mets, but he always hated the Yankees. Lou liked to tell jokes – one of his favorite expressions when he forgot something was “I’m going Egypt”; then he would look at you and smile and say, “See Nile”. He also told jokes when having cocktail hour or dinner at their house in Lavallette and if his grandkids were in earshot and they would ask “what’s so funny” he’d reply, “I’ll tell you when you’re 21.” He also had very good manners, we were not allowed to get up from the dinner table unless we said “Grandpa may I please be excused from the table?”, and if we didn’t say it exactly right (he was also a buster) we had to repeat it until it was correct. Lou and Rae enjoyed travelling, their favorite place to visit was California. He was also a very caring and compassionate person. In her later years Rae’s mother Jean, moved in with them and he took exceptional care of her. Jean loved him so much that she would always side with him when he and Rae had a disagreement. He eventually retired, snow-birding between Lavallette, NJ and Stuart, Florida. Lou enjoyed cooking, primarily Italian food, he could make a mean vodka sauce and pasta e fagioli. He would host pizza parties in Florida where he would make everyone their own personal pizza with whatever toppings they desired. In Florida, he was a celebrity at the local Publix, everyone knew him by name, he would go there daily for groceries, and if something wasn’t to his satisfaction, he would return it – he was at the customer service desk daily. He enjoyed a large surprise celebration for his 90th birthday at the Manasquan River Golf Club which was attended by his friends and family. Lou spent the last few years in New Jersey surrounded by his family and friends. At this time, in lieu of a funeral service, we invite you to view and share photos of Lou at https://photos.app.goo.gl/1J63656xeP3j2E7S6
To plant a beautiful memorial tree in memory of Louis Sonta, please visit our Tree Store

Look inside to read what others have shared
Family and friends are coming together online to create a special keepsake. Every memory left on the online obituary will be automatically included in this book.
View Tribute Book
Services for Louis Sonta
There are no events scheduled. You can still show your support by planting a tree in memory of Louis Sonta.
Plant a tree in memory of Louis

Share Your Memory of
Louis
Upload Your Memory View All Memories
Be the first to upload a memory!
Share A Memory
Plant a Tree