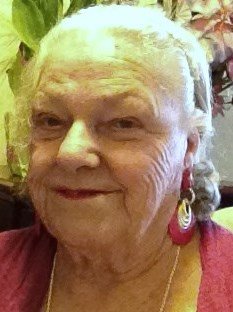 Dorothea “Dot” E. Kennell (Foersch), age 89, died peacefully on March 9, 2020, at Rose Garden Nursing Home, Toms River, NJ. Born in Hillside, NJ on New Years Day in 1931, she is survived by her son, John, and his wife, MaryAnna; her son, Donald, and his wife, Mary Fran; and her daughter, Carolyn. She is also survived by her three grandchildren, JoAnna, Tanner, and John, and two great-grandchildren, John and Daniel . She is survived by her brother, Edward Foersch, and several nieces and nephews. She is preceded in death by her mother and father, Frank and Grace Foersch, and her brothers and sisters, Mable, Irene, Marge, Francis, Frank, Florence, Grace, Joan and Betty Anne. Dot raised her three children on her own while living in Ocean Grove, NJ. She had to work two or three jobs to get by. It was difficult, but she did it, without complaining. She excelled at dressmaking, working for awhile at Roxanne Bathing Suits, and spent time making mother/daughter outfits for her and her daughter to wear in the Ocean Grove Easter Parade, with her two sons by her side in their Easter suits. In 1966, she moved her family to Point Pleasant, where she worked every day, for twenty-five years, by her then husband’s side, Jack Kennell, at Ken’s Landing Boats, Point Pleasant. In 1992, she retired and moved to Florida. She was so happy sea shell picking, crafting with all those shells, boating while dolphin watching, and hosting parties. She loved to host parties. For the past 6 years, she lived with her daughter, but since July 4, she lived at Rose Garden Nursing Home. In that short time, she entered the hearts of staff and residents. She always called everyone Sweetheart. She will be missed by many. “A Celebration of Life”, will take place on March 21, 12:00--2:00, at Ocean County Cremation Service, Toms River.
To plant a beautiful memorial tree in memory of Dorothea Kennell, please visit our Tree Store

A Memorial Tree was planted for Dorothea
We are deeply sorry for your loss ~ the staff at Ocean County Cremation Service
Join in honoring their life - plant a memorial tree
Services for Dorothea Kennell
There are no events scheduled. You can still show your support by planting a tree in memory of Dorothea Kennell.
Plant a tree in memory of Dorothea

Share Your Memory of
Dorothea
Upload Your Memory View All Memories
Be the first to upload a memory!
Share A Memory
Plant a Tree