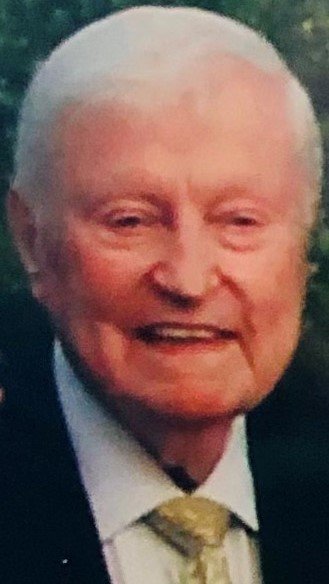 Obituary of Robert A McCormack

Robert A. McCormack, age 93, from Toms River, N.J., passed away on February 13, 2021, with his loving family around him. He lived a long and fulfilling life. During World War II he enlisted in the Navy at the age of 17 and became the captain of a PT boat. He was legendary on his ship for being the only person to ever sleep through “general quarters.” He was heading for Japan when World War II came to an end. He met his wife, Lee Garbarino, at the corner candy store on Avenue D in Brooklyn, N.Y. when he was 16. He remarked to his friend, “See that girl over there, I am going to marry her one day.” In 1949, he did marry Lee and forever thereafter was a devoted husband, father of four, grandfather of six and uncle to many adoring nieces and nephews. After he graduated from Stevens Institute of Technology in Hoboken, N.J., as a mechanical engineer in 1951, Bob started his career with Bigelow Sanford Company . In 1965, he became Director of Manufacturing for Egan Machinery Company in Somerville, N.J., and retired as Vice President of Manufacturing in 1987. He raised his family in Westfield, N.J. and lived there for over 40 years. He and Lee were avid bridge players and golfers, and they traveled the country. He was so proud that his retirement lasted for over 30 years. Investing was one of his passions and he fancied himself as a bit of a Warren Buffet. Lee and Bob’s move to Toms River, N.J. in 2009 extended their years of enjoyment. They had many friends and pursued their passion for bridge. Bob was generous with his time and ideas, and he was a mentor to many. He was always a very positive person. Bob was interested in people, their life stories, and he listened. He spoke with reverence of his family and friends. He reached out to people when they needed comfort, and when they didn’t. He treated everyone with respect, dignity and empathy. He had smiling eyes, a ready laugh, and a spritely step. He embraced each day with a subtle glee that was infectious, and he made all those who were blessed to be in his presence feel worthy of their being. He improved the lives of all those people who were lucky to be part of his life. He was a loving person, and a quintessential gentleman. He will be sorely missed, but his spirit and his goodness will remain forever. Left behind to carry on Bob’s legacy are: his beloved wife of 71 years, Lee; his children, Kathleen McCormack from McLean, Virginia; Carol McCormack from Mountainside, N.J.; Bob McCormack (Denise) from Leland, N.C.; Diane Badger (Ken) from Evergreen, Colorado; six grandchildren; his brother, Richard McCormack (Grace) from La Jolla, California, and many cousins, nieces, nephews and friends. Because of COVID-19, Bob’s Celebration of Life and Mass of Christian Burial will tentatively be delayed until July 10, 2021 at 10:30 A.M. at St. Luke’s Roman Catholic Church in Toms River, N.J. He will be laid to rest at Arlington National Cemetery, Virginia in the Fall. If you would like to honor Bob’s memory, donations to his favorite organization would be much appreciated: Jersey Shore Rescue Mission, P.O. Box 1289, Asbury Park, N.J. 07712-1289. JerseyShoreRescue.org To add condolences, please go to web address: https://oceancountycremationservice.com/ please hold down the ctrl key and click on the link in blue to open the website.
To send flowers to the family or plant a tree in memory of Robert McCormack, please visit Tribute Store
Saturday
10
July

Celebration of Life and Mass of Christian Burial

Share Your Memory of
Robert
Upload Your Memory View All Memories
Be the first to upload a memory!
Share A Memory
Send Flowers
Plant a Tree